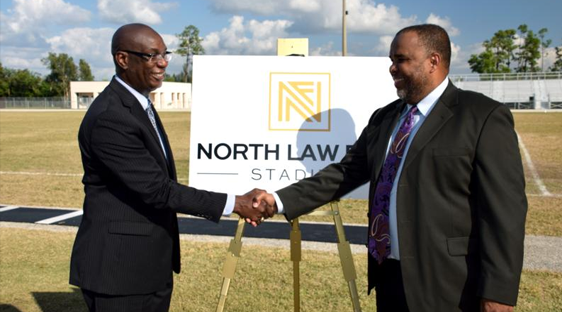 Joe North and Carl Burnside used to shoot hoops as children on the courts that would become the STARS Complex.

Now they are adults and connected again not far from their childhood homes and playgrounds.

North, a Fort Myers and Fort Lauderdale attorney, and Burnside, the principal at Dunbar High School, announced a new sponsorship and naming rights contract, the first deal of its kind in the Lee County School District and part of a growing national trend as public education looks to fill a growing gap in funding. 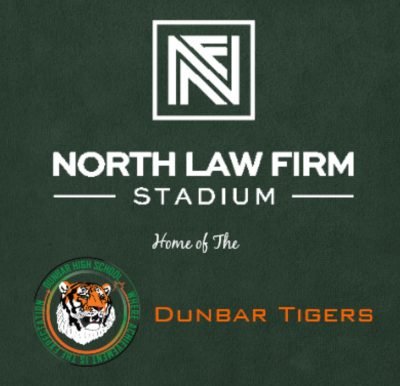 “Drum roll please,” Burnside said as the Dunbar Tigers drumline did just that during an unveiling ceremony on the stadium’s track.

North Law Firm Stadium will be the new name of the Dunbar Tigers football, soccer and track and field stadium.

“This is something very personal to me,” North said. “Dunbar High School is not just in the heart of Dunbar, but it’s in my heart.”

North Law Firm will pay $5,724 per quarter for a total of $22,896 per year over the five years.  The sponsorship will inject $114,480 into the school district’s infrastructure fund, one that has been falling since 2006, going the opposite direction of the student’s ever-growing enrollment.

Even after my insurance company denied my initial claim, the North Law Firm was able to get me the care and compensation I deserved.

Leave Us A Review

The North Law Firm, P.A., provides comprehensive representation for individuals and their families who have suffered injuries, death, and other losses due to the negligence of another party.